The Role of Big Data in Direct Response Campaigns

Once Upon a Time: The Origins of Direct Response Marketing

Once upon a time, there were only agents and brokers. There was no direct response. There was no Big Data. Sounds like the beginning of a fairy tale but this is a true story.

There are probably not too many of you who actually know some of the origins of direct response insurance marketing. Once upon a time, all insurance was sold through agents and brokers. This was also pre-Al Gore inventing the Internet, so online selling wasn’t yet an option.

In the 1970s an insurance agent named Arthur DeMoss decided getting clients one at a time wasn’t helping his business grow fast enough. He came up with the idea to advertise a low-cost product in the mass media – and add an incentive to sweeten the deal. He ran ads in magazines and newspapers offering prospects supplemental health insurance for just 25 cents for the first month.

He worked out of his home at the time and before he knew it, his entire bathtub was filled with quarters. He had a runaway success on his hands and a very angry wife. Now Arthur was smart enough to know that he had a great idea, but he also knew he needed help to move his business from the kitchen table to the corporate boardroom.

The first thing he did was buy an insurance company. Then, he hired a marketing staff. He could have hired agents and brokers as his marketers. While they knew how to sell insurance, Arthur realized that they didn’t know anything about selling to a lot of people at once. So, he did something extraordinary: He hired Proctor & Gamble marketing people, the Tide and Charmin folks. He figured that no one knew better how to market directly to consumers or were more focused on marketing data than P&G.

How did that work out for him? Well, thousands of employees and millions of dollars later, it worked out just fine. Many companies joined the “direct to consumer” insurance movement. Today, insurance products much more complex than supplemental products are successfully sold directly to the consumer, something that Arthur probably never envisioned.

In the 1970s, rudimentary as the process was due to the technology of the time, each publication, insertion date, product, and creative was tested, tracked, and analyzed because of the type of people Arthur had hired. By today’s standards, this would be called Little Data and not the Big Data we speak of today. Decisions were made on what little data there were, but those decisions were made by the numbers and not by intuition, which was an important factor in the success of the program.

Today, the words “Big Data” are everywhere. The term is used in a variety of ways so I went to our resident expert, Kevin Courtright, DMW Direct’s VP of Marketing Analytics, to find out the true definition and what it means to us:

“Big Data can best be described as a shift in behavior regarding data. Previously, there were constraints, such as storage and the processing power of computers, which limited the use of data. Individuals would need to determine what information they thought was most important to capture and discard the rest.”

The good news is that now we can save everything because we have the technology to capture and process everything. Kevin is able to do what he does because “the analysis of data has gone from testing whatever hypothesis led you to capture certain data elements … to the ability to use algorithms to sift through your data to determine what is important.” In other words, Big Data made a big difference.

You Know What Happens When You Assume…

The bad news is that using intuition has crept into the process. With data being modeled and sorted into neat piles of descending levels of response and conversion, it is tempting to make cut-off decisions on how far down to go in those models without testing or analysis. Assumptions are made based where other companies cut off, on other product models, or on broad indicators without a deeper dive into the data. With the fast pace of marketing today, it is easy to fall into the trap of “going with the gut” instead of “diving into the data.” There is an old saying that “data, when tortured enough, will confess to anything.” If we speak for the data and not let the data speak for itself, decisions can be made that really negate the value that Big Data brings.

Here is an example where intuition could take over. We know intuitively as experienced health insurance marketers that prospect age and income are always top attributes to consider; the data bear this out again and again in the profiles and predictive models we prepare. However, accepting age and income as the only deciding factors and stopping there based on our intuition isn’t using Big Data to its fullest extent. Analytical techniques can uncover important nonintuitive attributes that can be used within the modeling plan to help win incremental responses and members.

These attributes are different for every health plan. There is no “one-size-fits-all solution” to segmenting a prospect base. For one plan, the presence of grandchildren may be a top indicator of propensity to respond. For another, it may be interest in home improvement. There is no way to intuit which attributes will rise to the top. Big Data allows us to sift through hundreds of unique data elements in order to determine the most predictive.

Variations in what elements are predictive are not just found from health plan to health plan, they can be found from touchpoint to touchpoint within a campaign. Intuition would say that everyone is the same throughout the campaign – one model for all touches. However, while analyzing AEP results, Kevin discovered that the profile of the individuals that responded early in the period was different than the profile of those who responded later. We then adjusted our selection models across touches in order to capitalize on this discovery. That is letting the data speak (and listen).

More caution on the Big Data front. Knowing that a model has indicated the people who will most likely respond and/or buy can sidetrack crucial decisions on how to position creative and what the offer should be. If the model tells me they are going to respond, does it matter what I send them? Mailing to the right people may be 40% to 45% of the success of a direct mail program, but creative and offer still make up 55% to 60%. Getting your kit in the hands of the people most likely to buy doesn’t necessarily mean they will open it. The creative and offer are still vitally important.

If we look back on Arthur DeMoss’ initial foray into the direct response world, he had the right idea with an incentive – 25 cents for the first month. Creative and offers were tested. The basics worked then … they still do today. Big Data has complemented those basics by adding the ability to gain huge amounts of insight into what was just called “the list” (who you mail to). In fact, Big Data’s ability to help us pinpoint the right audience has probably raised the percentage that “the list” contributes to the overall success of a campaign, but it certainly has not negated the importance of creative and offer in the equation. 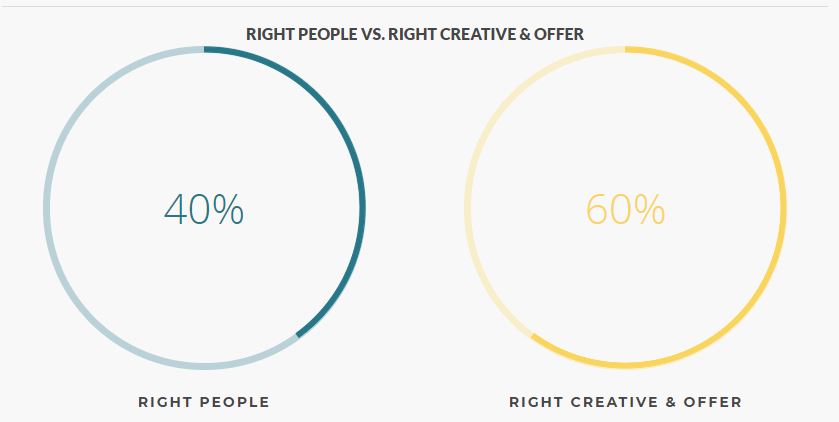 Despite his love of data, Kevin is the first to recommend to marketers that they follow all the basic direct response tenets: “In order to maximize profitability long term, you need to continue to examine creative, data sources, offer, and channels.” It’s appealing with AEPs and OEPs, as tight as they are in both time and budgets, to take chances that a “guess” will suffice when it comes to setting a strategy for the key elements of a campaign. Testing may seem an expensive luxury. However, there can be a greater cost in taking a chance on what seems right or even remaining status quo.

Standing Out Through Research